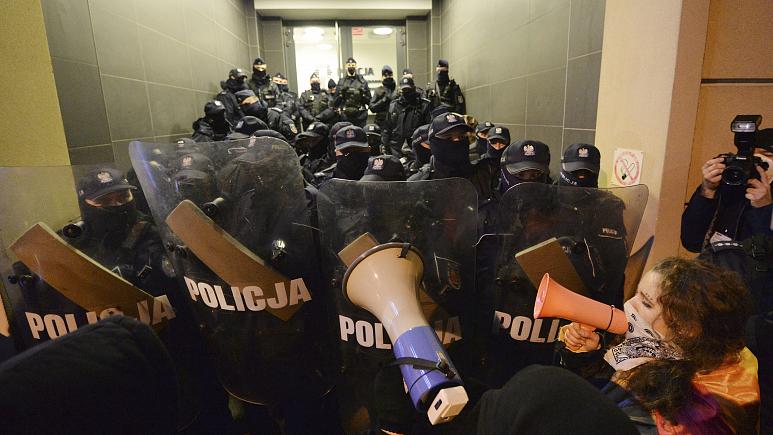 ‘We’re standing with you’: MEPs hit out at Poland over abortion crackdown

A majority of European lawmakers who took part in a debate on abortion rights in Poland expressed solidarity with protesters, vowing to «join them in this battle till the very end».

MEPs debated Polish abortion rights on Wednesday afternoon and will vote on a resolution on Thursday.

Poland’s Constitutional Tribunal ruled on October 22 that it is unconstitutional to abort a foetus if it has congenital defects.

The ruling further chipped away at the country’s abortion rights — already some of the most restrictive in Europe — and has led to a backlash with tens of thousands regularly taking to the street to condemn it despite public gathering being banned as part of efforts to contain the spread of the deadly COVID-19 pandemic.

Protesters’ anger has been targeted at the ruling right-wing conservative Law and Justice party (PiS).

Helena Dalli, the Commissioner for Equality, opened the debate stressing that «from a legal perspective, it is clear that the EU has no competence on abortion rights within a member state».

She noted however that the bloc launched an Article 7 procedure against Poland in 2017 over concerns over the independence of the judiciary and that these «have so far not be resolved».

Talking about the regular protests, she said: «I wholeheartedly hope that these voices are being heard and listened to.»

«Strong women rights are an asset and an achievement which the whole of Europe must be proud of but progress is hard-won and easily lost and we see this in Europe and worldwide,» she continued, adding: «backsliding is not an option.»

Spain’s Iratxe Garcia Perez, leader of the Progressive Alliance of Socialists and Democrats, labelled it «utterly unacceptable that in the 21st century, in a member state of the EU, the rights of women are being attacked as is happening today in Poland»

«The parliament has to stand up and say no,» she went on, adding: «We can’t allow our daughters to have fewer rights than their mothers and that’s what’s happening right now in Poland.»

«Today Polish women are left with no other option than going to neighbouring countries to undergo a safe and legal abortion and the Polish women who can’t afford to go abroad face even worse prospect. I see this as a move backwards in time,» she said.

«To the women of Poland I would like to say, we are standing right next to you and we will join you in this battle till the very end,» she went on.

But a minority who took part sided with Poland.

Joachim Kuhs, from the Alternative for Germany party, criticised MEPs who are «going to judge Poland because they say yes to life».

«Who is really protecting life and human rights more?» he then questioned.

Jadwiga Wisniewska, Polish MEP from PiS, also defended her country’s top court ruling, saying it adhered to the constitution and said that «the UNion has to respect members states in their right to determine» their health services.

She also lashed out at those who encouraged protesters, arguing that their effort «to impose this left-wing agenda is going to lead to illness and death because of COVID-19.»

The strength of the protest movement has led the government to delay the implementation of their proposed law. It also proposed earlier this month to amend it so that abortion will still be legal for a foetus with deadly abnormalities. However, terminating a pregnancy for other conditions, including Down’s Syndrome, would be illegal.

The amendment has not appeased protesters who continue to gather in large numbers and violence appears to be escalating.

Human rights groups have said they have «serious concerns» about the authorities’ use of «excessive force» on protesters.

Demonstrators have meanwhile disrupted religious services and clashed with far-right activists who say they are protecting churches.